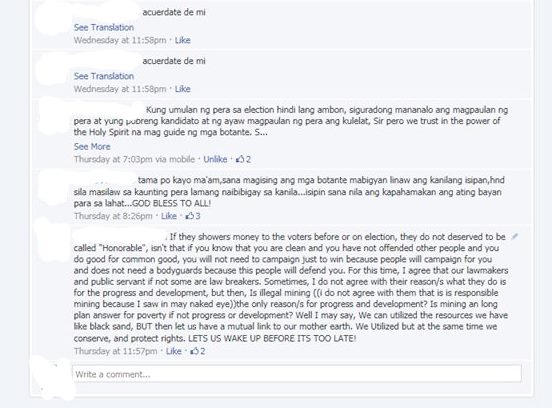 Saturday, 20 October 2012 – An Aparri Regional Trial Court Judge, Hon. Conrado Tabaco, issued an arrest warrant for Esperlita Garcia, President of the Gonzaga Alliance for Environmental Protection and Preservation, despite the Supreme Court temporary restraining order issued sometime 9 October 2012.  This warrant was issued on the basis of a libel complaint by Gonzaga Mayor Carlito Pentecostes Jr., over a Facebook posting that has subsequently been deleted from the FB account.  Ms. Garcia was subsequently released on PhP 10,000 bail after being detained overnight Thursday, 18 October 2012.

Note: The Inquirer article does not indicate clearly whether or not the Facebook post (image of which is above) was the subject of the libel charge; nor indeed, unequivocally, that the charges invoke Article 353 of the RPC, or provisions of the (suspended!) law RA 10175.  Another thing that concerns me just now is the question “what exactly does the temporary restraining order proscribe?”  Was it correct to even have arrested Ms. Garcia even with the TRO in place? Must read some more, and find myself a copy online someplace of that TRO.

At any rate, political comment is manifestly NOT protected under Articles 353 et seq in the Revised Penal Code, which proscribes libel:

Art. 354. Requirement for publicity. — Every defamatory imputation is presumed to be malicious, even if it be true, if no good intention and justifiable motive for making it is shown, except in the following cases:

1. A private communication made by any person to another in the performance of any legal, moral or social duty; and

2. A fair and true report, made in good faith, without any comments or remarks, of any judicial, legislative or other official proceedings which are not of confidential nature, or of any statement, report or speech delivered in said proceedings, or of any other act performed by public officers in the exercise of their functions.